Derek Chauvin’s Mom didn’t seem to care about George Floyd at all!

Would Nia Long be a Good CastMember on Basketball Wives?

Nia Long just might have a chance to be on Basketball Wives since her man has just been hired as Head Coach by the Celtics?!

If you’re not a basketball fan yet heard the name of the new Celtics head coach and thought it sounded familiar, we can tell you the reason why. For those outside of the sports firmament, Ime Udoka is more famous as the longtime partner of actress Nia Long, with whom he shares a son.

The Nigerian-American Portland, Oregon native, 43, is expected to be announced as the coach of the storied franchise as early as today. Their last coach, Brad Stevens, will head upstairs to replace Celtics’ great Danny Ainge in the front office.

Ainge, a former player who had been the team’s GM since 2013, announced his retirement earlier this month.

According to a story by NBA reporter Adrian Wojnarowski for ESPN, Udoka stood out from the beginning and was endorsed by several current Celtics stars – Jayson Tatum, Marcus Smart, and Jaylen Brown. They had experience with him when he coached Team USA for the 2019 FIBA World Cup.

Udoka, 43, was a professional basketball player for 12 years, bouncing around from international leagues to the NBA to the NBA developmental league, now called the G League, so he’s experienced the game on just about every level. Once he retired in 2012, he spent seven years as an assistant coach to Gregg Popovich with the Spurs, then onto the 76ers for a season before landing with the Brooklyn Nets in 2020.

Even though it took nine years, moving from an assistant to a head coach is still impressive, considering Udoka’s longest stint was with the Spurs — though the ability to move up there was likely limited for anyone until Popovich retires. Out of 30 teams, there are only seven current Black head coaches, a 50% drop since a high of 14 during the 2012-2013 season.

Udoka has one fan in the media already. Undisputed co-host Skip Bayless tweeted his support of the hire Wednesday.

NBA fans also supported the move as Long trended in the wake of the announcement – not Udoka. 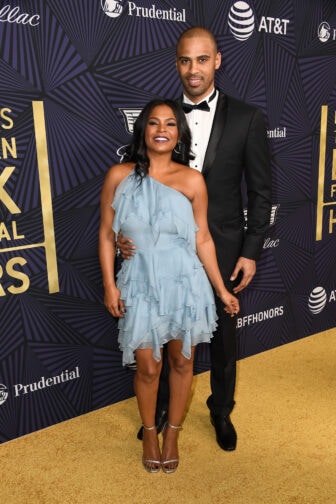 Although some reports have Long, 50, and Udoka already married, the two have been happily unmarried for more than a decade and share a son, Kez Sunday, born in November 2011.

Last year, Long told Essence she was perfectly happy with her personal life the way it is.

“Love is complicated, let’s just start there,” Long told Charli Penn and Cori Murray on the “Yes Girl!” podcast. “And then you start a marriage, which I’ve never been married. And there’s a reason for that because I don’t know that I need to say ‘I do’ to prove to you that I love you. But also, what does marriage really [mean]… that you own me now and I own you? I don’t get that part.”

While she said she understands and celebrates the religious aspects of a formal union, she doesn’t necessarily think it’s for her and Udoka.

“That is beautiful and it’s fantastical and it’s dreamy and it’s every girl’s fantasy to have that moment. But I don’t know that I need that to feel like I’m in a partnership that’s working.”

Udoka would become the NBA’s eighth Black head coach if all current Black coaches retain their jobs in the offseason.