OMG! You do not want to miss The Harlem Globetrotters’ Spread Game Tour!

What’s up with ya’ boy, Kanye? Did you notice he’s still wearing a ring on his wedding finger?…

Kanye West camping out at Mercedes-Benz Stadium to finish ‘Donda’ 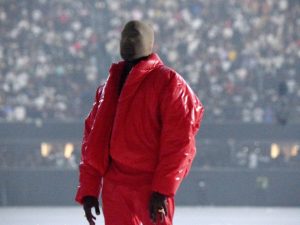 Is Kanye wearing a wedding ring?

After selling out Atlanta’s Mercedes-Benz Stadium, receiving an award of recognition for his mother and being honored with his own day, Kanye West has decided on prolonging his trip. To be specific, West is now living in Mercedes Benz Stadium, where he will reportedly finish up his album, Donda, according to TMZ.

West has reportedly been seen sporting the same red outfit he had on during the listening event, along with the mysterious stocking cap that shields his head and face.

West reportedly has a recording space, living quarters and a personal chef inside the arena. His reasoning for creating such a living space rests in the inspiration he garnered from the crowd at the Donda release party. While prices for the event reportedly ranged in price from $60-900, West gifted 5k tickets to faculty, staff and students from Atlanta HBCUs, including Clark Atlanta University, the Interdenominational Theological Center, Morehouse College, Morris Brown College and Spelman College.

Donda was slated for release this past Friday, July 23, but has now been pushed back to Aug. 6.

why Kanye West look like he starring in his own horror movie 💀 pic.twitter.com/oIS5aoe75m