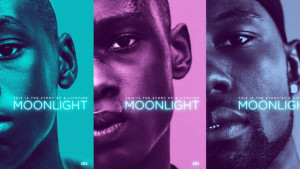 In this film Barry Jenkins creates a masterful picture of his perspective on the black community during the “War on Drugs” era through intellectual art. Jenkins tells the story of Chiron over a 16 year period of his life where he struggles to find his identity in the projects.

I will not give away any major details of this movie because it is a must see and I encourage you to watch it for yourselves. This is the type of movie that challenges stereotypes of the LGBT community; specifically within the black community. The way the picture is presented in this film trusts that the viewers have the ability to read in between the lines.  The main characters, Trevante Rhodes and Janelle Monáe, play exceptional roles in the movie as they force you to become emotionally invested.  Expect to see both in other features especially after their masterful performances in the film.

What makes this movie a can’t miss is that there are so many life lessons proposed by Barry Jenkins that you can take from the movie. He brings to life the effects bullying and drugs have on people, as well as the sometimes harsh criticism gay people face in the inner cities of black communities.

From just watching the movie and seeing all the important scenes and the brilliance of the film forces me to give this film 9.8/10.  Almost a perfect rating because this is nearly a flawless film that will likely win major film awards and it is definitely a must see.