The Rundown on Shorty’s Run the Runway

Women Billionaires from Around the World: Sara Blakely 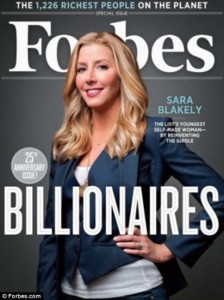 Some women wear them to conceal those awful fat around our stomachs. Some women wear them to hide unwanted lines piercing through tight dresses or pants, and other women just wear them for the extra support. Spanx is what some may call, the “footless panty-hoes.” Whether you wear them for tummy control or just because. All women can (should) agree: we are forever indebted to Sara Blakely, the inventor of the ever popular shape-wear, Spanx . Blakely’s Spanx mogul is worth $1 billion, making the 42 year-old the youngest female billionaire. Forbes Magazine has ranked her number 90 in the World’s Most Powerful Women list and number 426 in the United States Billionaire’s list. Today she is ranked as number five in Young Urban Life’s on our Women’s Billionaire list.

Blakely began her spandex wear after she discovered the complications of wearing white pants. Most women are familiar with the “white wear” problem. If not, allow me to fill you in. The white wear problem becomes occurs when your undergarments and sometimes cellulite, can be seen through your white clothes. The end result mainly resorts to people refusing to buy or never wears the white purchases. However, Blakely says she found the solution when she cut the foot off of panty-hoes that hid everything. This was Blakely driving force for creating what we now know as Spanx.

Blakely started her empire with a whopping $5,000 from her Atlanta apartment. It was here where she took the next steps in finding a manufacturer to test drive the product and the rest is pretty self explanatory. The word on Blakely’s new shape-wear reached the ears of Oprah–another woman billionaire later mentioned in our list—and was later featured on Oprah’s Favorite Things in 2001. Soon after the referral, sale purchases of the new shaping underwear took off by storm. Forbes Magazine reports that Brakely, a mother of one, is a definite powerhouse with over $250million in annual revenues and net profits margins estimated at 20 percent. In addition, she owns 100 percent of the private company. Now that is how a lady is supposed to run a shape-wear empire!

Sara Blakely continues to make history becoming the first female billionaire to join the Gates-Buffet Giving Pledge in April. The foundation founded by Bill Gates and Warren Buffet advocates wealthy people like Sara Blakely, to give at least half their profits to charity. Yes, Miss Blakely gave $250 million to charity, but her humanitarian efforts goes beyond Bill Gate’s charity pledge. She also gave $100,000 dollars to a campaign called The Empowerment Plan. This campaign focuses on creating jobs for homeless women living in Detroit. Blakely’s active support with different charities demonstrates that she is not only a woman running a billion dollar company, but she is a billionaire who has a loving, and giving heart.

So the next time you put on some Spanx for date, or maybe just for the heck of it, take the time out to thank Heaven for Sara Blakely. She came up with a solution that solves half of many wardrobe malfunctions women face. From her footless panty-hoes that began in her apartment to her well established undergarment empire, Blakely is a true definition of innovator, and more importantly, a self-made billionaire.

"Heart of A Woman" by GregAlan Williams [AUDIOBOOK]
Coupled Up: Keri Hilson And Serge Ibaka Boo’d Up At Privé As Cassie And Fabolous Host!
Random Ridiculousness: Man Throws A/C, Canned Goods, Pots & Pans, Etc. Out Window At Cops – Then...