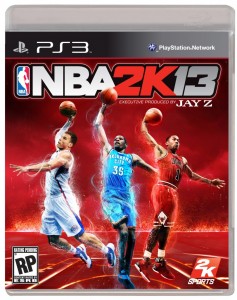 Before I go into my review of this game, it needs to be noted that I’m not and have never been a big fan of sports.  Let alone, sports video games.  But I start this review off with that so you can really understand as the reader, how amazed I was to see that I actually LOVE this game.

NBA2k13, it starts off with a simulated concert by the King of New York’s own, Jay-Z, also known as Mr. Beyonce.  The soundtrack of the game is amazing.  All of the game audio including sounds of crowd participation and sounds of the players is excellent and crisp; you can even hear the sneakers on the court and the basketball as it hits against the floor.  This game is done so well, that while playing it, you will actually feel like you are in the game.  That’s because before the game begins, you can customize your player.  You can customize from the largest detail to the smallest detail like the shape and size of the eyes to adding tattoos.  You can decide between tall and short, white or black, young or old.  If you really have the patient and the time, you can make your basketball player look exactly like you.

After you pass that portion, you go to pick your team.  You are given a list of all the current NBA teams and once the game begins, it’s narrated by what appears to be real live actual sports announcers, giving you a play by play report on the game as you would see in real life.  To the creators of this game, every single aspect and element of a true NBA basketball game is put inside this video game for a maximum gamer experience.  I highly recommend this game for anybody that is a fan of the sport or even a non-fan of the sport.  This game is for all types and ages of gamers, I feel even women would love it.  If the realistic players don’t get you into loving this game, than the soundtrack and music arranged and produced by Jay-Z will.  If I were to grade this game, it would get two thumbs up and a 10.