ATLANTA, GA (Sept. 2016) – The Fox Theatre and Cobb Energy Centre are excited to announce Atlanta’s much heralded Spelman College Glee Club will be joining Dance Theatre of Harlem (DTH) for two live performances on Oct. 22 and Oct. 23. Supporting DTH for the first time with a live backing vocal performance, the Glee Club’s seventy-five (75) acclaimed singers will accompany “Change” choreographed by Dianne McIntyre, a former Spelman College Distinguished Visiting Scholar. The group will be performing Two Negro Spirituals: “By and By” arranged by Roland Allison and “Don’t You Let Nobody Turn You Around” arranged by Dr. Kevin Johnson, director of Spelman College Glee Club both nights.
“We are thrilled to have the Spelman Glee Club join the Dance Theatre of Harlem for this rare collaborative performance,” said Jamie Vosmeier, Senior Director of Sales and Marketing at the Fox Theatre. “The already unconventional company challenges ideals of classical ballet and brings it a breath of fresh air. Coupled with the traditional spiritual and sacred backing vocals from the Glee Club, the performances will be sure to mesmerize audiences.” 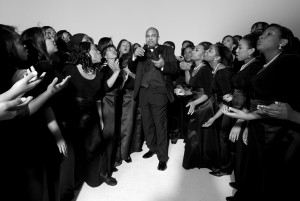 “The Spelman College Glee Club is honored to participate in this performance with the Dance Theater of Harlem,” said Dr. Johnson. “Our nearly 100-year history of singing the souls of black folks is in perfect unison with the high standard of excellence these dancers represent. We will come together in movement and voice to celebrate the awesome beauty of the human spirit. We thank the Dance Theater of Harlem for allowing us the share in such a special event for the city of Atlanta.”

About the Fox Theatre

The Fox Theatre is one of Atlanta’s premiere venues for live entertainment and declared a Top Stop of the Decade by Venues Today Magazine and the #1 non-residency venue worldwide for the decade by Billboard Magazine. In April 2013, Rolling Stone Magazine announced that the Fox Theatre was one of “The Best Big Rooms in America” as part of their “Venues That Rock” series. In addition, The Fox Theatre was nominated for Theatre of the Year by Billboard and Pollstar Magazines, and awarded the Outstanding Historic Theatre of the Year award in 2011 by the League of Historic American Theatres. For the past decade, The Fox Theatre has been consistently ranked in the top three non-residency theatres in North America for gross ticket sales by industry trade magazines, Pollstar, Billboard and Venues Today. The Fox Theatre has the #1 social media presence for any theatre or performing arts center in North America, for any venue between 2,000 and 5,000 seats, and for any Georgia venue according to the Social Media Power 100 compiled by Venues Today Magazine. The Fox’s 4,665 seat theatre hosts 250 performances a year. An impressive range of events from rock concerts to Broadway, ballets, comedy and movies continue to attract more than 500,000 visitors per year. In addition, The Fox is host to wedding receptions, trade shows, corporate meetings and association functions in its fabulous ballrooms, lounge and outdoor terrace. As a 501(c)(3) non-profit arts organization, the Fox Theatre stands today as a fiercely protected landmark and a nationally acclaimed theater and is celebrating its 86th year. The partners of the Fox Theatre are Delta, Coca-Cola, Lexus, Georgian Terrace Hotel/Livingston, Georgia Natural Gas, Regions, Atlanta Beverage, Grady Health System, and Whole Foods Market. Tickets for all events are available at The Fox Theatre Ticket Office, online at www.FoxTheatre.org, and at all Atlanta Ticket Alternative locations including Whole Foods Markets, or toll free at 855-285-8499. For group sales information contact The Fox Theatre at (404) 881-2000, or visit The Fox Theatre website at www.foxtheatre.org