One of my favorite classes at Georgia State was about the cultural and social regime of representation focusing specifically on race and gender. Ok, let me back up; one of my favorite classes at Georgia State pointed out how women and different races were depicted in a negative way through advertisements. The regime of representation is when the dominant class pushes its ideals onto the subordinate class. In lament terms how the majority belief of something was pushed onto everyone making it seem as if the majority belief was the only one there was. This topic is one that hits home with me because until I took this class I did not realize how in my face this topic was. Now I have heard some people refer to it as being too “conspiracy brother,” but let me put some examples out there and by the end of this article see if you look at a few things in a different light.

Honestly, if we talked about music videos there are just too many examples of how women are sex objects and put on the same level as smoking, cars and money. In those cases no one event tries to hide the fact that women = sex. So, let’s go a little deeper and take print commercial ads.

The way I want to approach this is from the film viewpoint; different races have been stereotyped countless times throughout film and television. In the past it was more obvious than it has been today, but it is still present. To shorten this down a bit I’ll speak on women in particular. African American women have been stereotyped (as the regime idea) to be overly sexual – the jezebel, sometimes overly aggressive to other African Americans-the mammie, and so forth. Think about this; it is a great honor to be the first African American woman to win an Academy Award for Best Supporting Actress, but the role was for a house slave-like role (Hattie McDaniel). It is great to be the second African American woman to win an Academy Award for Best Actress, even if it for playing a woman whose husband is in jail, whose sons is killed and who does an explicit sex scene with someone of the opposite sex (Halle Barry).  I’m really not judging, but I am stating facts. Hispanic woman have also been depicted as been overly sexual and not too smart. Asian women have been depicted as being submissive and (oh here’s a pattern) overly sexual.

On a side note I want to point out that I’m watching television while writing this and out of the last seven commercials I have seen with multiple women in them all of them ended with a closing shot of a Caucasian woman. Just another thing to stir in your pot.

I am going to quickly point out some subliminal messaging through some advertisements examples. Before I go into this remember one thing, there are people who do ad composing and creating for a living. These people have taken classes on the art of hiding messages so it does not seem forced upon a person and make no mistake there is always a reason why something is placed where in context. The examples I will give is not me thinking too much into it, but me making small details come to light.

Take the picture of a woman in a movie theater holding her two children to her chest with an alarmed expression on her face. Black women have a stereotype of over reacting or being extra loud in everyday situations. Look behind the woman, the other audience members have joyful expressions on their face. So why is this woman portrayed as being frightened at what other people find ease with? The commercial has another “humorous” element to it by having the woman grabbing her two boys and holding them against her chest. On this particular commercial, there is an article on the views of this picture in The New York Times online. http://www.nytimes.com/2006/08/01/business/media/01adco.html?pagewanted=all&_r=0. In this article it briefly touches on the fact that some culturally opinionated images are produced by black people themselves. In the NYT, the writer says this means these types of photos are more acceptable. I say that it just goes to show how much this way of thinking (that it is ok to embrace stereotypes for profit) has sunk into our minds subliminally, subconsciously, sub-whatever you want to call it.

Another photo that shows two women “facing off” raises my concerns and point of view. What is the first thought that pops into your mind when you look at this? Here is what you see at first glance: white woman, black woman. Black and white picture; serious mood/vibe; black and white shading in the background. Now, let me show you the details that make this picture a prime example of the dominant way of thinking that in society black people and white people are not on the same level. White woman is clearly in a dominant role, both with her position and the fact that she is looking down at the black woman and because she is gripping the black woman’s face. Black woman is in a subordinate position because she is looking up and has what I would call a stunned expression on her face. The picture highlights the white woman, both in her lack of clothing and by her front and center position in the frame. The black woman is all but out of the frame with mainly her head and shoulders showing. This picture pushes the regime (dominant) way of thinking in three simple points: the women’s positions, the women’s face expressions and the amount of woman that is shown. 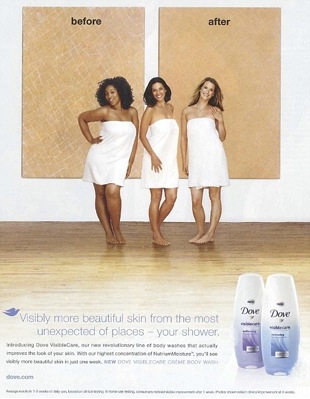 I am only taking examples from commercials, but can you imagine how many things I could point out if we were talking about movies? This could honestly be a weekly series. I did want to give you a piece of my mind when thinking on subliminal messages in advertising that enforces African American woman stereotypes. Commercials do more than lay messages through the pretense of advertising. Sometimes they make no move to “cover” anything up, but just outright put a message out there.

Random top 5 list of cultural no nos in ads! No 5: Photoshop loves making skin lighter and lighter. For example, I have noticed that through the years Beyonce’ has gotten more and more of a reverse-tan. Might as well say, “Mirror, mirror on the wall, who is becoming lighter of them all?…Beyonce’… but only in print.”

No 4: I personally have noticed that when a commercial has several women in it and they are of different races, more than likely the ending shot will be on a white woman.

Interesting little fact No 3: have you noticed that all McDonald’s commercials feature black men, women and children. On one hand this is positive because we are getting more camera time. But could we get more camera time on a Subway or other healthy food ad?

Small fact No 2: while there are not a lot of cigarette ads anymore in general, the ads for Newport cigarettes always feature black men and women.

What am I trying to say? Just because it is pushed on us to look at stereotypical advertising dealing with gender and race does not mean we have to join into the regime’s idea of all of this. There are people who have no problem with anything I’ve pointed out while there are others, such as myself, who wish things were different. Then there are people who combat this dominant idea of gender and race roles in the media. This way of thinking will only remain dominant if we let it, if we keep playing and listening and adding and buying into it. It’s really simple, if you do not agree with something you see or experience speak up so it can be noticed. I know realistically that every little thing a person disagrees with will not be changed, but making an effort makes a difference. Blog about it, tweet it, Facebook it, Instagram it, Snapshot it or ignore it or stand against it. “It” is the countless pictures and advertisements that show African Americans and all other races in a negative or stereotypical way. If you do not like something do whatever you need to do in your own way to express how you feel. Sometimes I feel like shouting out “WOMEN POWER!” for no reason throughout my day. I know it sounds odd…I still feel that way about it. This is one of my personal ways to act against what is pushed on me day in and day out. I am not loud (eh…80% of the time), I am not overly sexual (*cough* I know how to use my appeal in a way that says lady not hussy), I am not a lot of the things that I see on television and film; the regime of representation has it wrong in this case.

ORIGINAL MOVIE "BEHIND THE MOVEMENT" PREMIERES ON TV ONE SUNDAY, FEBRUARY 11 AT 7PM ET IN CELEBRATI...
Florida Crazies: Man Charged With Murder After Strangling His Ex-Wife And Throwing Her Off A Cruise ...
The Cool Kids Interview Paula Jai Parker 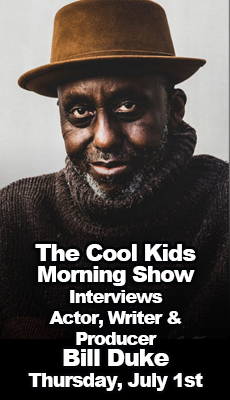