Funk Jazz Kafe’s Documentary: Diary of A Decade (The Story of A Movement) 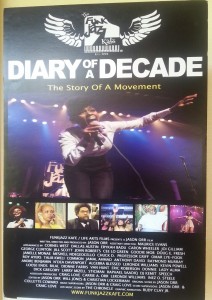 While many people filled their seats at Georgia Lakewood Ampitheater and Gwinnett Center July 12, I took my seat at the Southwest Arts Center to witness the historic, and what will soon be a legendary documentary. Funk Jazz Kafe: Diary of a Decade (The Story of a Movement) shows the evolution of soul music during the times of the late 1980’s to early 2000’s. Jason Orr–the writer, producer, and director of the movie–brilliantly and accurately captures every aspect of soul music and its evolution. He is also the founder of the magical and cultural building Funk Jazz Kafe. Throughout the film, ask and answers questions like: what is soul music, where it originated from, which soul artists were game changers in the evolution of soul, and most importantly why has soul music become soul-less? People of all ages came out to see this film and to support the movement Funk Jazz Kafe has provided for over 19 years to soul music lovers.

Upon the arrival, I was captivated by the sight of black culture that was portrayed through various aspects of the black arts. Straight ahead was a deejay that played 80’s and 90’s hip-hop, r&b, and soul music. To the right of the deejay booth was an art exhibit which instantly caught the eyes of viewers with sketches and paintings from black artists. In the middle of the exhibit were two artists who were creating there art in live form. As I continued to walk through the building, I saw other black businesses promoting their companies. They even had a concession stand where people could purchase some t-shirts! Finally I found a seat in the front of the auditorium. While waiting, we sat and conversed with each other until the movie began. And then, Jason Orr, the man himself, introduced his documentary. 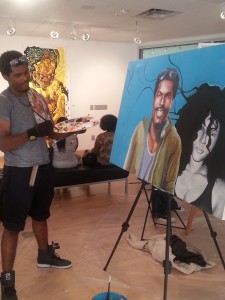 A plethora of artists were featured in this movie including artists like: Cee Lo Green, Erykah Badu, Mizell Brothers, OutKast, Janelle Monae, Dallas Austin, Raphael Saadiq, Jamie Fox, George Clinton, Jill Scott and more. Its historical and cultural influence continues to live on as the cafe celebrates its 19th year anniversary. Although I did not attend the FJK music festival the next night, I am sure it was the experience of a lifetime. Jason Orr says it best:

“Magic only happens if you believe in it: point and blank. I like to dream and create real. As you all leave, look at that drawing you all saw out there. That was my first creation of Funk Jazz Kafe and the stage alone amazes me to this day.”

Instead of going in depth about the documentary, I felt it was more important to provide readers the reaction from the audience in the question and answers discussion asked at the end of the movie. Diary of A Decade received nothing but positive feedback from the audience. Their statements, comments, and questions better explains the impact one will receive after viewing this documentary.

Question: This was a great film and my first time seeing it. It is a wonderful testament to your dedication for the promotion of the arts, creativity, documentation, and vision—and we really solute you. I want to know, did you do the filming or were there other film makers?

Jason Orr: You know, it was taped over a period of time; a decade plus. Of course I went around like yea (signals him holding a camera) on all of it. So it might have been a little bit of Shannon Cobb or John Crews, and some other people. I talked to the videographers and what angles I wanted to catch. Then I talk to them about the program and what’s going to happen or what we think is going to happen, because something else always happens. And it never goes as plan. That’s the magic.

Question: What has made you do this for 19 years? It’s a labor of love when you wake up every day, what makes you want to do Funk Jazz Kafe?

Jason Orr: Yal. (applause from the audience) It wasn’t a thing to build personal wealth. It was a thing to build a strong community. For example, like the story about LA, we could all read about that. I went down to DC and people were saying how embarrassed they were of their community. DC created a new dance invention like the “GoGo.” New rich artist like Donny Hathaway, Marvin Gaye, even new kats like Raheeme Devaughn. People have to lead DC to get their recognition. If we had a Mount Rushmore in Georgia, it would be James Brown, Ray Charles, Ottis Ready…see you guys already know.

Jackie Marks: I have two questions. Were there any artists you wanted to include in the documentary but could not?

Jason Orr: Yea…a lot in that period. You know when you’re talking about the music Jazz Funk, and its influence on hip hop, one of the first things you think about is a tribe called West. Umm Q-Tip and who wouldn’t want to talk to Prince, Stevie Wonder or James Brown? My goal was to capture every living legend. So yea, there were some.

Jackie Marks: Second question. What would you like to see Funk Jazz Kafe 19 years from now?

Jason Orr: Umm…I haven’t thought that far yet. I think what we’re doing are still in the early stages in terms of the perseveration of music and culture. I may be one of the first. We need people to talk about the preservation of SOUL music.

Question: Thank you Jason for your documentary. What I have always loved about Funk Jazz Kafe is that it transcends generations young and old. It’s soul music that makes us move and feel good. So I just want to commend you for your work. Today they are taking arts out of schools, radio doesn’t appreciate it as much, and parents do not expose it to children enough. Can you give some encouraging words towards the youth to continue in the arts?

Jason Orr: If there are any young people in the audience…it is important to do you and not be caught up in the colt of celebrity. Don’t get caught up in trying to do Nikki Manaj, Lil Wayne, or whatever is hot now. Actually do you and your own expression. Also look at your peers and their skill sets and what they contributed to the community. Thanks for the question.

Question: I wanted to know, as an investor, what do it takes for you to produce the show every year and then take it on a larger scale? 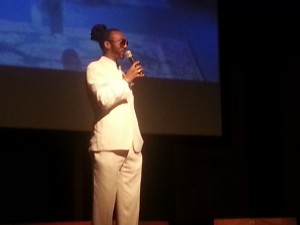 Jason Orr: Well, preparation, money, money, and money. (audience laughs) That is basically it. And just show up!

Question: If I wanted to direct some of my close friends to the movie, how would I do that?

Jason Orr: You can check it out at by going to funkjazzkafe.com. We are still screening all over the country until 2014.

Question: I saw that you had a lot of artist come through in your performances. Is there anyone you were just star-strucked by and said to yourself: “Man, I can’t believe I that I had them on my stage!”

Question: Jason I just want to thank you for this film. Much respect to you. In your dreams what is on the horizon for you?

Jason Orr: Funk Jazz Kafe was almost like a ten step program. Step one was to establish FJK Music Festival. That went well for us. And then we decided to take it on the road, books, tv shows, and movies. So there is still a lot going on. Next year will be 20 years. Imagine that! I have been doing new music. And I have been very fortunate to work with other great talents. We possibly could take FJK on the road again but I like taking a DVD around. (audience chuckles) It’s much lighter. There are more films that I am already working on that I can show in trailers today. Most importantly, to educate people about our culture, where we come from, and how we got to where we are today.

Question: I have been to a number of Funk Jazz Kafe’s Music Festivals and what really struck me was your personality and humility. I think the genius of your documentary highlights the initial ten years of your movement and also gives a very thorough history of black music in America. For young people who may have not been around during the time you started filming your documentary, how can FJK movement help educate young people in our schools?

Jason Orr: You know I do a lot of college tours. I wanted to make education at peace in terms of where do we come from, where are we going, and the actions you can take; something that is a social change. So I appreciate your question.

Question: Jason, your movie was an extraordinary documentary. You played a big part in breaking a number of artists people really didn’t know about. In regards to new artists today, who should we look out for?

Jason Orr: King. How many of yal know King? (light applause) Since Stevie Wonder, that brother has created some of the most beautiful stuff ever. It’s a lot out there, but that’s one of them.

Jason Orr: Hope to see you tomorrow because we have a show for you! Thank you all again for coming out.

Honestly, this was an amazing film that changed my perspective on how I view not just soul music, but any genre of music. During the screening, I have received a revelation: We (the audience) consider ourselves to be very knowledgeable in music. After watching this documentary, I have learned that we have so much more to learn. The life span of music can be traced back many years. It has and will continue to outlive the human life. It has and will continue to make us feel, breathe, and move to its beautiful sound; no matter how it is played or expressed. However, we are not masters in the subject of music.  I think any producer, songwriter, and artists can agree with this statement. Passionate is something seen through what you do. Jason’s passion for music, arts, and black culture goes beyond Funk Jazz Kafe and his documentary. It’s his life style and is living  proof that magic really can happen if you believe.